Exit 270 off Interstate 15 | Ulm, Montana
(follow signs north on paved road for 3.5 miles)
406-866-2217 | http://stateparks.mt.gov/first-peoples-buffalo-jump/
First Peoples Buffalo Jump tells the story of one of the largest prehistoric bison kill-sites in the United States, and in the telling, captures a portrait of daily life for Montana’s first peoples. For more than 600 years, native peoples stampeded buffalo over the mile-long cliff, risking their lives to obtain life-sustaining buffalo meat and hides. No part of the animal was wasted. In the visitors center and on interpretive trails, First Peoples provides a glimpse of these natives and the plains they called home. Atop the cliff, accessed by a 3-mile hiking trail or a short drive, you take in a panoramic view of the Rocky Mountain Front, the Missouri River Valley, and the buttes and grasslands that make this Montana landscape so memorable. The iconic structure of the native people is the tipi, originally constructed of buffalo skin and often painted to reflect traditional tribal battles or personal experiences such as war, hunting, or a dream or vision quest. At this state park, you can encounter a typical tipi structure. Enter the full-sized tipi and listen to the murmur of the plains and the song of the meadowlark. See an ancient tipi ring of rocks, used to hold down the liners of the tipi, and learn of Indian customs. Step outside and try your hand at wielding an early Indian weapon, the atlatl, a spear-throwing tool that uses leverage to increase the speed of the spear. 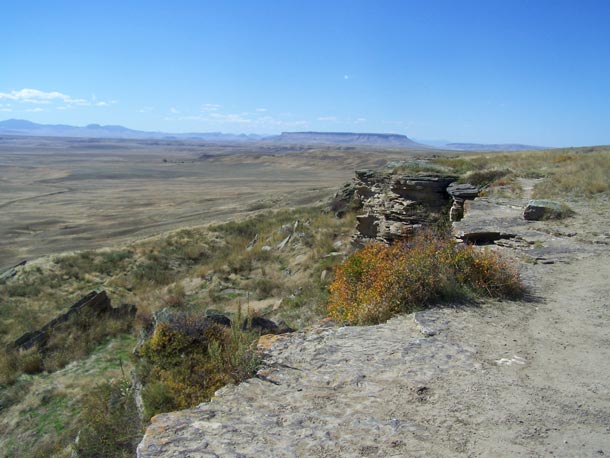