Many credit early forester, Wilderness preservation pioneer, and Wilderness Society co-founder Bob Marshall with single-handedly protecting at least 5.4 million acres of wildland. The least he deserves is to have this pristine area named for him. This region, in fact, was set aside as the South Fork, Pentagon, and Sun River Primitive Areas in 1941, and designated the ‘Bob’ in 1964. Here is one of the most completely preserved mountain ecosystems in the world, the kind of Wilderness most people can only imagine: rugged peaks, alpine lakes, cascading waterfalls, grassy meadows embellished with shimmering streams, a towering coniferous forest, and big river valleys.

The Wilderness, which includes the North and South Forks of the Sun River and the Middle and South Forks of the Flathead River, runs for 60 miles along the Continental Divide, with elevations ranging from 4,000 feet to more than 9,000 feet. A huge escarpment called the Chinese Wall, a part of the Divide, highlights the Bob’s vast beauty, with an average height of more than 1,000 feet and a length of 22 miles. The Chinese Wall extends into Scapegoat Wilderness to the south. 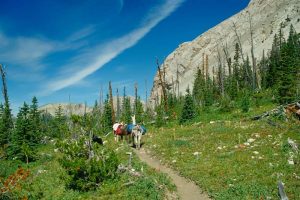 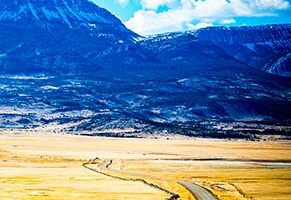