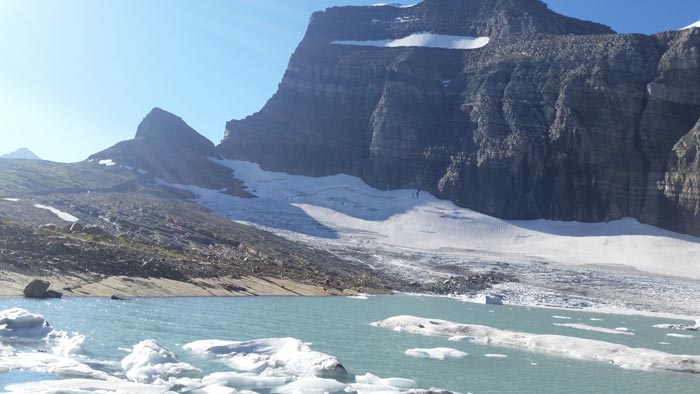 Hitting the Grinnell Glacier trail at sunrise requires an early start but also ensures several hours of solitude since the water taxi isn’t running at that time. Although this adds several miles to the trail length, for my friend’s first time on the trail, it was totally worth it. Shortly after reaching the banks of Lake Josephine, only a mile into the 12-mile day ahead of us, we found fresh bear scat on the trail.

We had bear spray which we immediately took off our packs in favor of having them ready. I had been followed by a griz on this trail several years earlier. After another 100 yards, we saw them, two grizzlies in the meadow several hundred yards above us. They were too busy harvesting huckleberries to acknowledge us. After putting several hundred more yards between us we stopped to watch them busily eat the ripe berries.

We finished the climb up the Upper Grinnell Lake by 8 am and had the whole place to ourselves. Hiking along the shore of the Upper Grinnell Lake, you can reach the Glacier as it hits the lake’s edge. Large plates of ice break off here and float in the lake, powered by the wind. One large ice float was near the shore so we hopped aboard for a ride. It was a good spot for a short rest, knowing we would have to swim back in the 30-something degree water.

We even scraped enough snow together to make a small snowman to man the ice raft once we left. We were back on the trail by 9:30 only passing a dozen hikers or so on the way down. We stopped at the Lake Josephine boat dock where we jumped in to knock off the trail dirt. If you find a Kershaw lock-blade on the shore there, hit me up on Instagram, its mine.