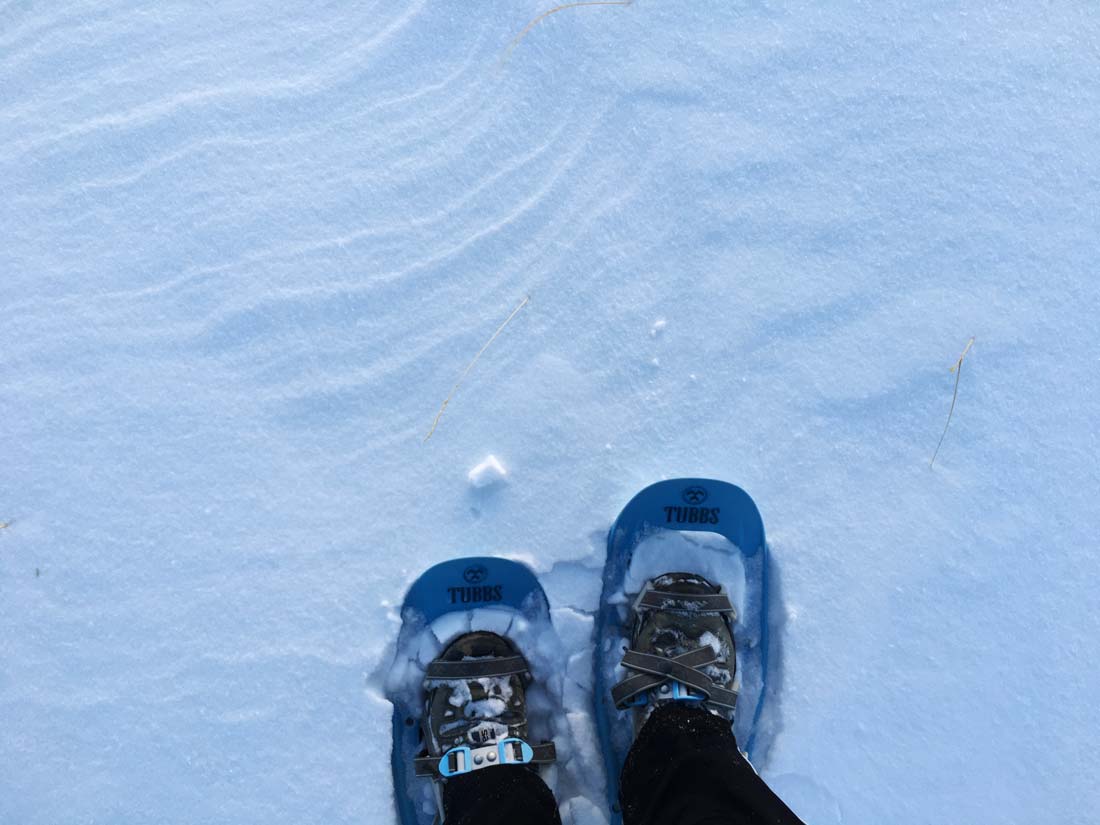 To hear some locals talk about it, Great Falls is the ugly stepchild of Montana’s cities. Most people don’t speak of our city with the greatest admiration and even those that have grown to love it still would admit that although the mountain recreation is amazing, the plains our city was built on don’t have a lot to offer. I would normally apologetically agree, but this snowy winter has given me a new perspective on our city and it’s surroundings. Thanks to some new snowshoes and a furry friend I made one day, I have discovered the joy of the Great Plains of Montana.

Just outside Great Falls and past Rainbow Dam on Rainbow Dam Road is the start of the North Shore Trail system, a great piece of land that is open for hiking and biking in the summer and cross country skiing and snowshoeing in the winter. I wanted to test out the new snowshoes I received for Christmas and so I waited for a snowy day and suited up to spend an hour or two outside. I navigated around snow drifts that had piled up along the road on the way out, parked in the gravel North Shore Trail parking lot and strapped into my snowshoes. After putting some headphones in and tuning into some good hiking music, I took off across the snow and started a climb up the side of a ridge.

The wind was blowing steadily and the sun was starting to set, so although my cheeks were burning, I was so glad I picked the time to go out that I did. The sky was turning orange and I knew my chances of finding crepuscular animals were pretty high. I reached the top of the ridge and my prediction was immediately realized: I started a giant herd of deer across the ridge and they took off running down into the coulee below me. I grabbed my phone out of my pocket to snap a quick photo but it was so cold out that it died within seconds. My music shut off and I was left with the sound of the wind and the crunchy snow beneath my shoes. It was actually refreshing to be left with just my thoughts and I enjoyed the time to refresh my mind and continue my hike long the ridge.

I decided to drop down into the coulee that the deer had run down and follow the small frozen creek that ran along the bottom. As I made my way down the steep ridge, the howling wind died away and I was left with the peaceful rhythm of my own footsteps. I picked my way around boulders and bony dogwood shrubs as I walked towards a short pine shrub at the end of the coulee. I came upon the shrub and I suddenly saw one of the pine branches moving despite the lack of wind. I got closer and realized that it wasn’t a branch of the pine tree that was moving, it was a porcupine! I got so excited. I’d only ever seen one other porcupine before and it was a just a glimpse; that night I was suddenly within fifteen feet of one and it wasn’t even scared by my presence. I stepped carefully around him and sat down on a boulder to watch him graze for a while. I pulled out my phone again to try to revive it enough to get a good picture but it remained dead weight in my pocket.

I enjoyed watching him scratch around for food amongst the grasses and shrubs. He moved very slowly around the tree and I could tell he had set up camp underneath there. There was a little bed of pine needles underneath the branches and he had dug up the ground all the way around the shrub. I watched him repeatedly scurry around, stick his nose in the ground to hunt for food and then come back up to smell the air – I think he knew I was near and was keeping tabs on me with his sense of smell.

After that hiking experience, I have returned several times to visit the porcupine I have decided to name Harold. He’s shy but cute, and I’m always careful to not get too close. Since finding him I had googled “porcupine quilling” and was adequately terrified by what I saw, so I will not be getting close enough to Harold to put myself in harm’s way.

Just knowing that right outside of our town is a place where I can get away from my daily routine and see wildlife, enjoy some fresh air, and break in the new shoes gets me more excited about living in Great Falls. I really hope I can help others discover the joy of their surroundings now matter where they are. I really believe that our town has so much more to offer than what we see at first. I’m dedicated to finding more of those hidden gems as this long winter turns to spring and I hang up my snowshoes in favor of hiking boots. Hopefully Harold doesn’t feel as adventurous as I do; I look forward to more visits with the little guy as the days grow warmer.